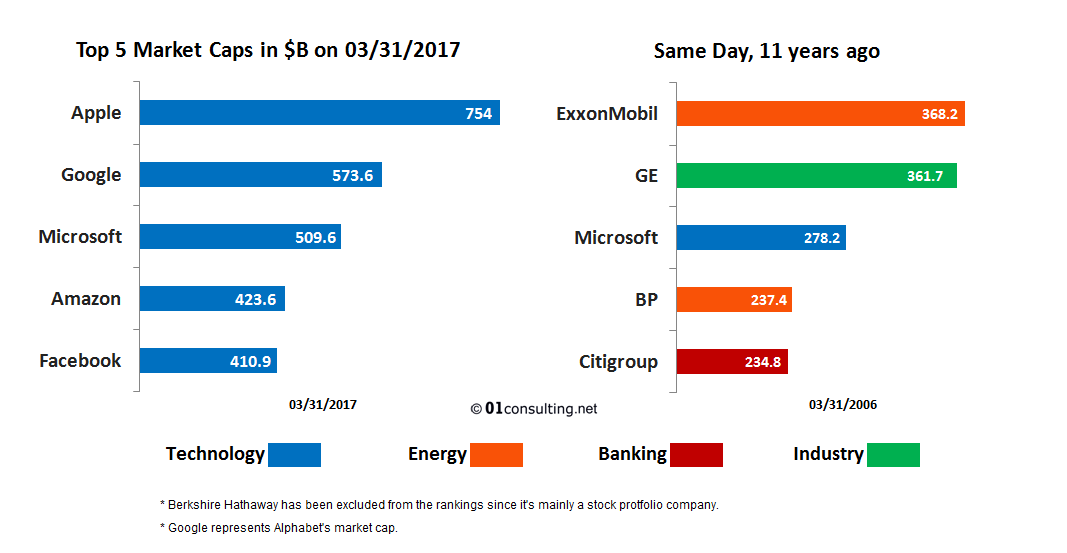 A version of this article previously appeared on Venture Beat.

A few years ago, Marc Andreessen first declared that “software is eating the world”. We have been mostly inclined to intuitively believe the trend he was referring to, but we were missing undisputable proof. Now we have quantified proof, at least for the domination of the technology as a whole if not specifically for software.
On Friday, I looked at the top 5 quarter-end market caps for the first quarter of 2017. All five are technology companies. I went back 11 years to the same day and saw that on March 31, 2006, only one out of the top 5 market caps, namely Microsoft, was a technology company. The top market caps were rather diversified, including financial services, industrial groups, technology, and of course oil production giants.

The sixth market cap on Friday was ExxonMobil, with $347 billion, which is 15 percent less than Facebook, ranked fifth. This quarter-end day quotation was not exceptional; this ranking seems to be stable and solid.
So what happened in the last decade at the top of the market cap list? When we look closer (see the graph below), we notice that the non-tech companies have stayed more or less in the same range while the tech companies have recorded unimaginable growth rates. Apple, Google, and Microsoft jumped to the top of the list, joined by Facebook and Amazon. Facebook went from $4 billion (our estimation of the then-private company’s valuation) to $410.9 billion. That’s about 10,000 percent growth in 11 years! Amazon grew about 3,000 percent in the same period.

We have just never seen anything close to these growth rates for this size of company and valuation. And for those who think that because these numbers are exceptionally unusual, there should be a bubble, well, Facebook’s price-per-earnings ratio is only 40. To put this in perspective, Microsoft has kept a P/E ratio in the same order of magnitude since the ’90s, well before the dot-com era. This does not mean there will be no market crash or bubble bursting; I am just saying that these companies are generating real revenue and profit just like the old top 5 companies, even though their services are often intangible.

Evolution Of Top Market Caps In A Decade 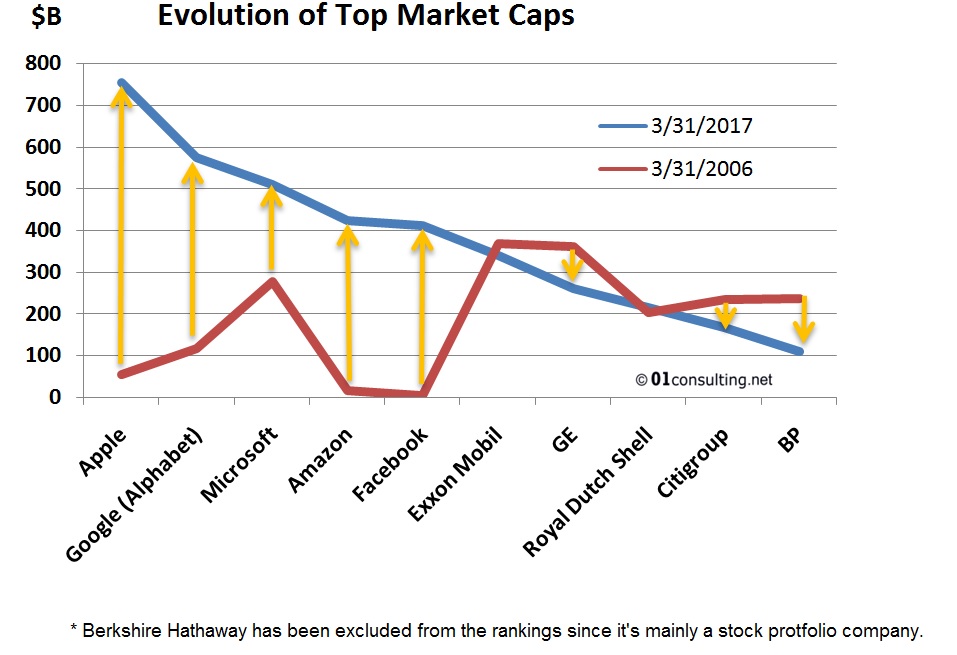 And we are just in the middle of the revolution. The next waves of automation and applications that are the result of what technology has achieved so far are around the corner. Transportation is about to be revolutionized with self-driving cars. The construction industry is next with houses built faster, better, and at lower cost. Inside homes we are going to see connected and smart equipment everywhere. I wouldn’t be surprised to see leaders in transportation, construction, and travel among the top 10 market caps within the next decade.