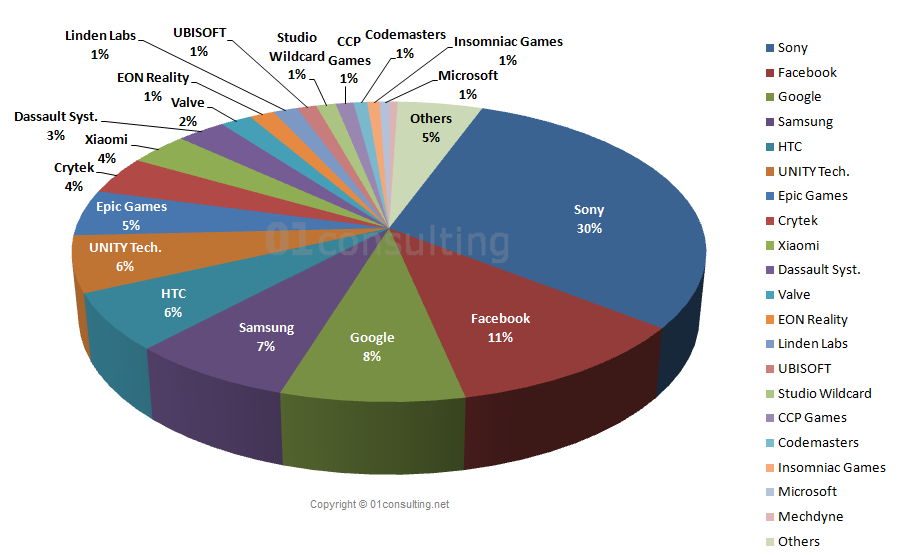 Sony, Facebook, Google, Samsung And The Rest Of The Top 20 Virtual Reality Vendors

This article was previously published on Venture Beat.

But is it permanent?

That said, we have also seen in the past that for some technologies, after several cycles of hype, the innovation finally does become mainstream. One example is personal organizers (mobile calendar and contacts apps) on a portable device. Palm OS and PDAs rose in 1996 and fell a few years later, and then Pocket PC and Windows CE rose in early 2000 and fell. It wasn’t until the emergence of iPhones and Android smartphones that those applications became sustainable.

So the big question is: Is VR here to stay this time, or is it hype?

To find the answer, my firm has been researching the VR market for the past few months. We evaluated and estimated product sales for over 30 companies and 40 products globally through revenues and units sold/used for each of the vendors. Here are some of our findings:

1. In 2016, hardware makers dominate the VR market. Sony (PSVR) is clearly leading and is taking one third of the whole market. This is thanks to a) the large installed base of about 40-50 million Playstations sold to users who are the perfect target for a VR upgrade and b) the best balance of price/performance for the VR headset around the $300-$400 price point.

2. Sony is followed by Facebook (the Oculus platform) and Google (Day Dream, Card Board, Tilt Brush, etc.); neither company has a VR user base anywhere close to Sony’s, and their products are either at the low end or a bit too expensive. Still, both companies are generating hundreds of millions of dollars already in 2016, thanks to their brand and the quality of their technology.

3. Samsung follows with another mobile headset (Gear VR). And HTC is close behind with its high-end headset, Vive, thanks to its partnership with Valve and the very popular Steam platform.

4. Content providers, mostly game makers, as well as technology providers come next. This has to change in the coming years (and hopefully will change) since that’s where the bigger value resides. But it is normal to see hardware makers emerge first: Hardware vendors had to ship their kits to developers. Now that there are enough headsets out there in users’ hands (or rather on their heads), it’s time to accelerate generation of content (games, mobile apps, desktop applications, etc). The result of this effort will be more VR games and applications in the coming months and years.

5. Towards the bottom of the top 20 list, we also see vendors positioned in the “VR for work” segment, with VR applications in collaboration, education, industry, military and defense, science and medical, and other research fields.

To dig into more data about the VR market, purchase the report from here.